Superman: The Animated Series is an American animated television series based on the DC Comics's flagship character, Superman.[1] It was produced by Warner Bros. Animation and originally aired on The WB from September 6, 1996 to February 12, 2000. The series was the first of several followups of the acclaimed Batman: The Animated Series, and was equally praised for its thematic complexity, quality animation, maturity and modernization of its title character.[2][3]

Premiering ten years after the 1986 reboot of the Superman comic-book character, the animated series paid tribute to both the classic Superman of old and the newer "modern" Superman. For instance, the depiction of Krypton reflects the older idealized version in the Silver Age of Comic Books while the scope of Superman's powers reflects the more restrained contemporary concept as developed by John Byrne in that the superhero has to struggle to perform spectacular feats, while Clark Kent is shown to be openly, if quietly, self-confident (similar to the depiction of Batman's alter-ego, Bruce Wayne, in Batman: The Animated Series).

Midway through the series' run, it was combined with The New Batman Adventures to become The New Batman/Superman Adventures. The characters of Superman and Batman were then spun off into a new animated series, Justice League, which also featured other popular DC Comics characters, including Wonder Woman, The Flash, Green Lantern, Martian Manhunter, and Hawkgirl which spawned a sequel series Justice League Unlimited.

One noticeable aspect of the series carried over from Byrne's work was Superman's powers were significantly downplayed compared to his comic book counterpart. Where as in the comic he could lift millions or billions of tons effortlessly, this version struggled lifting trucks, construction equipment, roadways, etc. The writers admit that he was made as strong as story permitted. His durability was also considerably less that while bullets bounced off him, heavier ordnance like high caliber bullets, cannons and missiles caused him pain or discomfort.

In the series, the evil computer Brainiac is not only from Krypton, but is portrayed as responsible for preventing the knowledge of Krypton's imminent destruction from reaching its people so as to save himself, rather than be committed in the presumably futile task of saving the population of the planet. In addition, the ship that carries the infant Kal-El to Earth is designed to have a pilot, and the autopilot used instead was programmed to land smoothly upon reaching its destination. This was done so that the ship is in perfect working condition during Superman's adulthood and could be used as his mode of long range transportation in space. Access to Kryptonian technology and artifacts is initially severely restricted, such as the ship containing a phantom zone projector and Braniac's technology, although Superman later finds a devastated colony in Krypton's solar system with partially salvageable technology, in addition to Kara In-Ze in her functioning cryostasis capsule.

Season two was originally scheduled to run 26 episodes, but it was extended to 28 episodes in order to accommodate a two-part story introducing Supergirl.[4]

While the series features adaptations of much of Superman's rogues gallery, the writers supplemented the supply of enemies by paying tribute to Jack Kirby's Fourth World creations that introduced the villain Darkseid to the series as Superman's archenemy. Darkseid had been portrayed as a villain in Super Friends: The Legendary Super Powers Show and The Super Powers Team: Galactic Guardians in the 1980s, but in this series, he was closer to the enormously powerful, evil cosmic emperor originally envisioned by Kirby. Corey Burton's voice performance as Brainiac was done in the same cold, low-affect style as HAL 9000 in the Space Odyssey films, and was also modeled after the 'Control Voice' heard during the opening narration of The Outer Limits.[citation needed]

As with the majority of shows in DC animated universe, Superman: The Animated Series received a comic adaptation taking place in the same universe, that ran from 1996 to 2001, with 68 issues, an annual and a special issue featuring Lobo. Paul Dini wrote the first issue of the series, followed by Scott McDaniel, Mark Millar and Evan Dorkin. Among the artists that contrinuited with the series are Ty Templeton, Rick Burchett, Mike Manley, Aluir Amancio, Min S.Ku and Neil Vokes.

Script error: No such module "Check for unknown parameters".

Superman: The Animated Series is widely regarded as one of the finest and most faithful adaptations of the character ever. It is considered the animated counterpart/equivalent to Batman: The Animated Series, sharing its unique animation style and adult-oriented approach. It currently holds an 8.2 rating on IMDb ranking 3rd on DCAU's best reviewed shows, behind only Batman and Justice League, which are listed as 1st and 2nd respectively. In January 2009, Superman ranked #36 on IGN's 'Top 100 Animated Series' list, again listed behind fellow DCAU shows Batman and Justice League, which were ranked #2 and #20 respectively.

Much like Batman: The Animated Series and other Warner Bros. cartoons adapted from popular DC Comic books, Superman: The Animated Series was released on DVD January 25, 2005, though it did not receive the same disc transfer as Batman did (the second disc of each volume was given the Side A/B treatment). The DVDs present the series' episodes in their airing order along with special features. Volume Two was released on December 6, 2005 and Volume Three was released on June 20, 2006. On November 24, 2009, Warner Home Video released Superman: The Complete Animated Series, a 7-disc boxed set that includes all 54 episodes of the series as well as extensive bonus features.[5][6][7]

A Direct-To-DVD feature, Superman: Brainiac Attacks was released in 2006, although it is not considered to be part of DCAU continuity, despite featuring the same character designs as Superman: The Animated Series, as well as both Tim Daly and Dana Delany reprising their voice roles as Superman and Lois Lane, respectively. 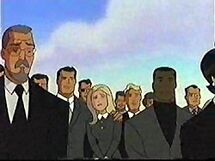 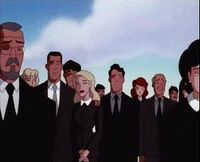 The mourners attending Dan Turpin's funeral in the edited version.

"Apokolips...Now! Part II" was later altered from its original airing on February 7, 1998. Originally the Dan Turpin funeral at the episode's end was a true homage to late New Gods creator Jack Kirby and featured several of his comic creations as attendees to the funeral including Nick Fury, the Fantastic Four, Big Barda, Scott Free, Orion and others, alongside Kirby's friends and fans Mark Evanier, Bruce Timm, Paul Dini, Alex Ross, his father Norman Ross and Stan Lee. These characters and persons were later removed and the scene pacing was re-edited for subsequent airings and its DVD release on Superman: The Animated Series Volume 3 Disc 3. The original sketches for this scene can be found at Michael Eury's book The Krypton Companion published by TwoMorrow's Publishing (ISBN 1-893905-61-6Script error: No such module "check isxn".). Neither DC nor Warner ever commented on the decision to alter this particular scene, but it's been speculated that copyright issues regarding the use of the likenesses of Marvel Comics characters and the long-time rivalry might have motivated the deletion.

As with Batman: The Animated Series, Shirley Walker was in charge of the series' music. Walker wrote the series theme and composed themes for various characters, as well as scoring six episodes herself – "Father's Day," "The Hand of Fate," "Obsession," "Absolute Power" and the two-parter "Legacy." Unlike the previous series, only four other composers worked on the series – Kristopher Carter, Harvey R. Cohen, Michael McCuistion and Lolita Ritmanis. Almost every episode had a completely original score; very few reused music from previous shows, and only one episode ("Superman's Pal," credited to Carter, McCuistion, Ritmanis and Walker) was entirely "scored" with tracked material.[8]

On January 28, 2014, La-La Land Records released a 4-disc compilation of music from the series, collecting 20 complete episode scores, including those of the "World's Finest" three-parter, the "Apokolips... Now!" two-parter, the "Little Girl Lost" two-parter and "In Brightest Day...". It is a limited edition release of 3000 units and can be purchased through the label's website.[9]

If sales of this release improve significantly, La-La Land Records will produce a second volume.[10]

Superman 64, released for the Nintendo 64 console in 1999, was the first video game to be produced based upon the series, however it is considered to be one of the worst Superman video games and worst games ever.[11] A second video game, Superman: Shadow of Apokolips was released in 2002 for the PlayStation 2 and GameCube consoles. It was produced by a different company, and was described as "a respectable but average superhero game.[12]

Retrieved from "https://ultimatepopculture.fandom.com/wiki/Superman:_The_Animated_Series?oldid=54023"
Community content is available under CC-BY-SA unless otherwise noted.