New Super Mario Bros. U Deluxe is a side-scrolling 2.5D platform game released on the Nintendo Switch worldwide on January 11, 2019. It is a port of the Wii U launch title New Super Mario Bros. U. It contains both the base game and the New Super Luigi U DLC. Mario, Luigi, Yellow Toad, Blue Toad (both generically named Toad in this game), and Nabbit all return as playable characters from the original Wii U title while this game introduces a new playable character, Toadette, who makes her playable debut in the New Super Mario Bros. games. She has a unique form known as Peachette, which she obtains after grabbing a new item called the Super Crown. The Peachette form grants her abilities similar to that of Princess Peach and Princess Daisy.[2] 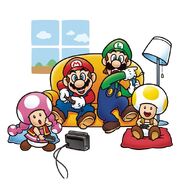 Mario, Luigi, Toad, and Toadette playing
Add a photo to this gallery

Names in other languages[edit | edit source]

Retrieved from "https://ultimatepopculture.fandom.com/wiki/New_Super_Mario_Bros._U_Deluxe?oldid=93586"
Community content is available under CC-BY-SA unless otherwise noted.