Not to be confused with World Mushroom in Super Mario 3D World.

Several small galaxies are in orbit around Mushroom World, including the Gateway Galaxy, the Good Egg Galaxy and Bowser Jr.'s Robot Reactor. Galaxies relatively close to Mushroom World on the map of the universe include the Sky Station Galaxy, Honeyhive Galaxy, the Loopdeeloop Galaxy and the Yoshi Star Galaxy.

The relationship between Mushroom World and Earth[edit | edit source]

Mushroom World and Earth are almost always believed to be separate planets, though confusion does exist in the form of remarkably similar ecosystems and terrains, several species of animals and obvious human populations on Mushroom World. The Mushroom World seems to exist at the same time period as Earth, seeing as how in Mushroom World there are cars and TVs and many other modern conveniences. In other media such as the various cartoon series and comics, Earth and Mushroom World were understood to be different versions of the same planet in separate universes, and Mushroom World was noticeably cartoony and slightly surreal (eg. Pasta Land, Down Under Land). In most sources travel between the two planets is possible through warp pipes, a fact that has remained consistent throughout.

These are the lands associated with the Mushroom Kingdom and thus the greater Mushroom World. These lands appear in the Mario series of games, as well as some spin-off titles. (The lands marked with * mean they were only shown on The Super Mario Bros. Super Show!)

The following is a list of planets separate from Mushroom World. (The planets marked with * mean they were only shown on The Super Mario Bros. Super Show!)

Other worlds in the Mushroom Universe[edit | edit source]

Worlds in other dimensions[edit | edit source] 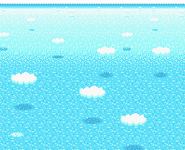 The surface of the planet as seen in Super Mario World 2: Yoshi's Island. 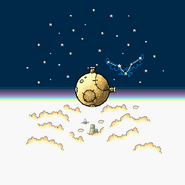 The surface of the planet during the battle with Raphael the Raven, also from Yoshi's Island.

The Mushroom World and The Moon in Donkey Kong Jungle Beat.
Add a photo to this gallery

Name in Other Languages[edit | edit source]

Retrieved from "https://ultimatepopculture.fandom.com/wiki/Mushroom_World?oldid=103644"
Community content is available under CC-BY-SA unless otherwise noted.