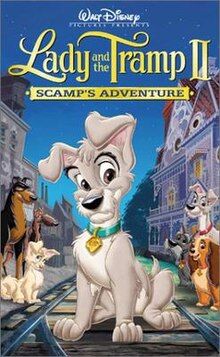 Lady and the Tramp II: Scamp's Adventure is a 2001 American animated direct-to-video musical romance film produced by Walt Disney Television Animation, and the sequel to the 1955 Disney animated film Lady and the Tramp. It was released on February 27, 2001, 46 years after its predecessor.

The film centers on Lady and Tramp's only son, mischievous teen-like Scamp, who longs for freedom from house rules and dreams of becoming a "wild dog". One day, Scamp runs away from home and joins the "Junkyard Dogs", led by streetsmart Buster. He also meets Angel, a lovely stray, but later finds himself forced to choose between the excitement and adventure of running wild and the love and devotion of his family back home, and struggles to decide which path to take.

In 1911, just two days before the Fourth of July, Lady and Tramp have three well-mannered daughters, Annette, Danielle, and Collette, and a rambunctious son named Scamp. After Scamp makes a mess in the house, Jim Dear chains Scamp to the doghouse outside as punishment. His parents, Tramp and Lady, are distraught that their son cannot settle down and follow house rules. Tramp tries to reason with Scamp, but loses his temper at his son's insistent desire to be a wild dog. Later, Scamp sees a pack of stray dogs, named the Junkyard Dogs, harassing the dogcatcher outside the yard and becomes intrigued. Scamp breaks free from his chain and runs off to find the pack. He finds a young member of the pack, Angel, and she takes him to the rest of the Junkyard Dogs. Meanwhile, Lady notices that Scamp has run away, and alerts Tramp.

Scamp attempts to join the Junkyard Dogs right away, but their leader, Buster, gives him a test in the alley, in which Scamp must successfully grab a tin can from a large, savage dog named Reggie. This results in Reggie chasing Scamp, but Reggie ends up getting caught by the dogcatcher. The Junkyard Dogs then head to a park, where Sparky, another member, tells a story about Tramp escaping from a group of dogcatchers. Buster, who was once good friends with Tramp, angrily explains that Tramp fell in love with Lady and became a house pet. Scamp is in awe that his father used to be a Junkyard Dog. After Scamp and Angel narrowly escape from a train and fall into a river, they start to fall in love, which leads them experimenting in the form of Scamp eating spaghetti off of Angel's derrière.

Meanwhile, Scamp and Angel find Scamp's parents, along with Jim Dear, Darling, Jock, and Trusty, as they search for him. Angel, who was once a house pet herself, is disgusted that Scamp would choose living on the streets over a loving family. The next day, Buster gives Scamp his final test: to steal food from his family’s picnic. Scamp succeeds, but is caught by his father. Scamp confronts him and Buster convinces Scamp to stay a wild dog. To prove this, Buster bites Scamp's collar off and a disheartened Tramp leaves. Scamp celebrates his newfound freedom until Angel scolds him for leaving his family. Annoyed, Scamp inadvertently reveals that Angel wants to be a house dog. She runs off, and Scamp tries to find her, to no avail. Scamp is caught by the dogcatcher, with a shocked Angel looking on. She runs to find Tramp; the two set off to rescue Scamp. At the pound, Scamp is attacked by Reggie. Tramp arrives and fights him off. Tramp then returns home with Scamp, and the family decides to adopt Angel.

Many of the original characters make a return, including Tony and Joe from Tony's.

Review aggregator Rotten Tomatoes reports that the film has a 45% approval rating based on 11 reviews and an average rating of 5.8/10.[3]

Community content is available under CC-BY-SA unless otherwise noted.
Advertisement