The GameCube controller is the standard game controller for the GameCube home video game console. Manufactured by Nintendo, it was released on September 14, 2001 in Japan, on November 18, 2001 in North America and in May 2002 in Europe and Australasia. 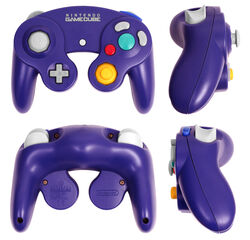 The standard GameCube controller provides haptic feedback by way of a built-in rumble motor rather than using an external Rumble Pak add-on like the Nintendo 64 controller. Also unlike its predecessor, this controller does not feature any expansion capabilities.

The primary analog stick is on the left, with the D-pad below it. The four face buttons are on the right of the controller (a large green "A" button in the center, a smaller red "B" button to its bottom left and two kidney-shaped buttons; "X" to the right and a "Y" to the top) with a yellow "C" stick below those. A Start/Pause button is located in the middle of the controller. On the "shoulders" of the controller there are two analog triggers marked "L" and "R," as well as one digital button marked "Z" which sits above the "R" trigger. The "L" and "R" triggers feature both analog and digital capabilities. Each of these behaves as a typical analog trigger until fully depressed, at which point the button "clicks" to register an additional digital signal. This method effectively serves to provide two functions per button without actually adding two separate physical buttons.

The GameCube controller was sold in several different colors over the console's lifespan. Standard colors included "Indigo" (dark navy blue), "Jet Black", and "Platinum" (Silver)[2], which were bundled with their respective colored GameCube consoles and sold separately in many countries.[1] Other standard colors sold separately included "Spice" (Orange), "Indigo/Clear" (Indigo top with a clear translucent bottom), "Emerald Blue" (Turquoise), and White; the latter two were only available in Japan.[1]

Nintendo released a number of limited edition controllers in Japan through Club Nintendo, which featured a unique color scheme and/or logo in the center. Club Nintendo controllers could be purchased for 500 points each and designs included "Mario" (red top and blue bottom),[3] "Luigi" (green top and blue bottom),[4] "Wario" (yellow top and purple bottom)[5] and a "Club Nintendo" controller (white top and light blue bottom).[6] The "Mario" design was also made available in limited quantities through the European Stars Catalogue for 5000 points.[7]

Additionally, a number of limited edition GameCube consoles have been released which included matching controllers. Colors released in Japan include "Starlight Gold",[2][8] "Crystal White",[9] "Symphonic Green" (mint green),[10] "Hanshin Tigers" (black with Hanshin Tigers logo),[11][12] "Gundam Copper" (two-tone red with Gundam logo)[2][10] and "Transparent" which was included with the "Enjoy Plus Pack +" bundle.[13] The "Symphonic Green" and "Crystal White" colors were also released in Europe, although the latter was renamed "Pearl White" and bundled with Mario Smash Football.[14] A Resident Evil 4 controller (Silver top and black bottom with logo) was available in Europe as part of a limited edition Resident Evil 4 console bundle.[10][15] The Panasonic Q, a GameCube/DVD player hybrid system exclusive to Japan, came bundled with a grey Panasonic branded version of the controller.[2][16]

While unlicensed GameCube Controllers are constantly on the market from third party manufacturers such as Old Skool and Mad Catz (though the latter has produced products that are officially licensed by Nintendo), they are criticized for generally being made of lower quality products than Nintendo's official GameCube controllers. The official controllers have become scarce at retailers, as an increased demand of the controller started due to the Wii's backward compatibility with GameCube games and the fact that several Wii games support the controller as a primary method of control. In response to the regained popularity, Nintendo decided to re-launch the GameCube controller. These relaunched models of the GameCube have a 3-meter wire cord, which is longer than the original models, which had a 2-meter wire cord. These relaunched models also lack the metal braces inserted inside the controller's triggers to help push the triggers down, something which the 2001-2007 manufactured GameCube controllers do have.

In April 2008, Nintendo released a white GameCube controller, exclusive to Japan.[17] The controller has not been released outside Japan, but online retailers such as Amazon.com and Play-Asia do import and sell the controller internationally.[18][19] It differs from previous editions in that it features a white cable which is 3 m (9.8 ft) long, rather than the 2 m (6.5 ft) black cable used on standard controllers. This model also lacks the metal braces inserted inside the L and R triggers (see above). In 2014, the manufacturing production of the white controller was resumed under the Super Smash Bros. branding, again exclusively for Japan (see more info on the Super Smash Bros. edition below).

Nintendo of America continued to sell wired platinum controllers up until early 2012 in North America, but have since sold out. It is unknown if they will ever go through another production run.[20]

During the Electronic Entertainment Expo 2018, Nintendo confirmed it is re-issuing the black GameCube controller for use with Super Smash Bros. Ultimate for the Nintendo Switch as the game officially supports the controller (in docked mode only, though it is still possible to play in tabletop mode via adapter) like its Wii and Wii U predecessors. The controller has the same length cable as the 2008 and 2014 re-releases and also lacks the metal braces inserted inside the triggers (see above). The re-issued controller was released on November 2, 2018, and features a simplified variant Super Smash Bros. emblem design. On the same day, Nintendo also re-released the official USB GameCube controller adapter, with a generic Nintendo embossed branding unlike the first edition that featured the Wii U logo. The Wii U adapter released in 2014 also works on the Nintendo Switch.[23] The Nintendo Switch itself and some of its games is technically capable of supporting the GameCube controller in docked mode (it can also be played in tabletop mode via HORI's Multiport USB Playstand) after a system update issued in October 2017.[24] Though GameCube controllers are now allowed, the Nintendo Switch recognizes them as Pro Controllers. Due to the lack of a minus button and an extra shoulder button, they may not be compatible with all games that require those said buttons.

Use on subsequent consoles[edit | edit source]

See also: List of Wii games that use the Nintendo GameCube controller

Although the follow-up console, the Wii U, also omits compatibility with GameCube software and hardware, Nintendo announced that an official adapter would be released that allows players to connect up to four GameCube controllers to the Wii U via its USB ports.[25] Though its initial product listing stated it would be compatible with any Wii U title that supports the Wii U Pro Controller,[26] Nintendo since corrected the listing, stating the adapter can only be used with Super Smash Bros. for Wii U and would not be compatible with other Wii U or Wii software.[27] The adapter launched alongside the game in November 2014, both separately and as part of a bundle with the game.[28][29] Support for the adapter on Nintendo Switch was introduced via its 4.0 firmware update; unlike the Wii U, it is supported by any game, although functionality may be affected if a game's bindings utilize buttons not found on the GameCube controller.[30]

Accessory maker Performance Designed Products (PDP) began releasing a line of officially licensed "Wired Fight Pad" controllers for the Wii and Wii U in 2014, with color schemes based on various Nintendo characters. They are based on the design and layout of the GameCube controller, but are connected via the Wii Remote's expansion port and act identically to a Classic Controller Pro (thus supporting any Wii and Wii U game that supports the Classic Controller Pro, but not GameCube games). To provide parity with the Classic Controller Pro, these controllers feature dual shoulder buttons, as well as the "+", "−", and "Home" buttons that the GameCube controller lacks. The smaller C-stick is also replaced with the larger[31][32][33] Hori released a similar product line known as the "Battle Pad", also officially licensed.[34]

In anticipation of Super Smash Bros. Ultimate, both Hori and PDP unveiled similar replications as USB gamepads for Nintendo Switch, both officially licensed. As with their Wii U counterparts, they maintain similar designs to the standard GameCube controllers, but updated to include dual shoulder buttons and Switch system keys. Each controller was at retail US $24.99.[35][36]

Manufacturer PowerA has released a Nintendo Switch Pro Controller which not only has a GameCube controller layout, but also has home and minus buttons added as well as an extra shoulder button, allowing it to be used in all Switch games. This controller was officially licensed by Nintendo and comes both wireless and wired. The wired controller uses a USB cable that plug into the Nintendo Switch dock while the wireless controller runs on AA batteries. The wired variant was US $24.99 and the wireless variant was $49.99. Despite the similar layout, these cannot be used to play on older Nintendo systems, such as the Nintendo Wii or Nintendo GameCube.[37]

Anascape Ltd, a Texas-based firm, filed a lawsuit against Nintendo for patent infringements regarding many of Nintendo's controllers.[38] A July 2008 verdict found that a ban would be issued preventing Nintendo from selling the regular GameCube and WaveBird controllers in the United States. Nintendo was free to continue selling the controllers pending an appeal to the U.S. Court of Appeals for the Federal Circuit.[39] On April 13, 2010, Nintendo won the appeal and the previous court decision was reversed.[40]

Retrieved from "https://ultimatepopculture.fandom.com/wiki/GameCube_controller?oldid=89511"
Community content is available under CC-BY-SA unless otherwise noted.