It is made up of a network of regional television services providing daily news programming and around ten hours of entertainment and cultural programming produced for and about the regions each week. The channel also broadcasts various national programming and national and international news from Paris. The channel was known as FR3 or France Régions 3 until its official replacement by France 3 in September 1992.

Prior to the establishment of Outre-Mer 1ère, it also broadcast to the various French overseas territories.

La 3e Chaîne Couleur began broadcasting at 7:00pm CET on 31 December 1972. The station's first President Director General (PDG), Jean-Louis Guillaud, decided to call on the ORTF's regional television services and aspiring young staff to join the new network, which would broadcast in colour, with no advertising or continuity announcers (although out-of-vision announcers were later introduced). Upon launch, Jean-Louis Guillaud and the head of ORTF, Arthur Conte, went on the air and together laid out a vision of the new service.

To begin with, La 3e Chaîne Couleur's broadcasts were restricted to three hours each evening and only reached a potential audience of 26% of the population – its transmissions primarily covered Paris, the Ile-de-France and Northern regions.

On 7 October 1974, law reforms signalled the breakup of the ORTF into seven separate state-owned companies. In the case of the third channel, the Société nationale de programme de télévision France Régions 3 (FR3) was given responsibility for management and development of 22 regional television services and 29 regional radio stations under the editorialship of 11 broadcasting centres.

FR3 was launched on 6 January 1975 with its PDG, Claude Contaime, choosing to concentrate on film, debate and local opt-outs as the network's main output. By 22 March 1975, daily local programming for the regions had commenced. Some national programming, including Les Jeux de 20 Heures, made heavy use of the regional network by linking up to studios around the country for live features. In the case of Les Jeux de 20 Heures, it is said that such programming led the State government to understand the importance of regionalism and to gradually undertake measures to decentralise France administratively and economically[citation needed] .

On the programming front, the network's first national news programme was introduced in 1978 in the form of Soir 3, a late night national and international bulletin. 21 October 1981 saw FR3 begin regular live coverage of the ministers' questions of the National Assembly. Advertising was introduced to the network in January 1983. By September 1983, the twelve broadcasting centres around the country were airing an average of 3 hours a day of regional output. Popular programming on Saturday night included the first airings of the American soap opera Dynasty and a Disney Channel strand. National and regional news at peaktime was integrated into a new nightly programme, 19|20, launched on 6 May 1986.

In 1986, the then government of Jacques Chirac put forward the proposal of privatising one of the three public television companies. The original suggestion was to turn FR3 into a private body, however the final decision was that of TF1. The broadcasting authority at the time, the CNCL, appointed Rene Han to become programme controller of FR3, with the result that the networked programmes took an even more highbrow and cultural focus.

Changes to the schedule included a supplementary Friday night edition of Thalassa- le magazine de la mer whilst an televised opera was aired every Wednesday night. Popular quiz show Questions pour un champion made its broadcasting début in November 1988. La Classe, an entertainment programme which replaced Les Jeux de 20 heures and followed 19|20, was also introduced. Having launched without utilising speakerines, the network introduced in-vision announcers in September 1987 and retained live continuity until 1993, a year after TF1 and France 2 had abandoned in-vision presentation.

At the turn of the decade, the French television landscape which had been previously dominated by the three public stations now consisted of a strong private sector in the form of TF1 and Canal+ and the now-fragmented public sector of Antenne 2 and FR3. In 1990, the State, through the Conseil Supérieure de l'Audiovisuel (CSA), decided to merge the separate public entities into a new corporation.

At the same time, FR3 was already closing down on Saturday afternoons to allow nine hours of airtime to the educational station La Sept. The arrangement continued until 1992 when the launch of the Franco-German network Arte led to the broadcaster's demise. On FR3 itself, the network aired current affairs programming on Saturday mornings including Continentales and L'Eurojournal, both presented by Alex Taylor.

On 7 September 1992, FR3 and Antenne 2 formed France Télévisions and rebranded as France 3 and France 2 respectively. In 1998, France 3 partnered with TPS to launch a satellite station called Régions.

Between 2000 and 2005, La Cinquième (now France 5), RFO (together with RFOsat, now France Ô) and France 4 joined France 2 and France 3 under the France Télévisions corporate identity.

On 5 January 2009 all on-air advertising on France Télévisions, (including France 3) between 20:00 and 06:00 were eliminated, meaning the traditional start of primetime viewing in France of 20:45 was brought forward by ten minutes to 20:35.[1]

With the establishment of digital terrestrial television, France 3 has seen its national audience share down to under 10%, behind M6.[2] 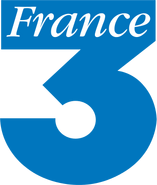 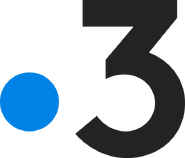 France 3 is a general entertainment channel which has missions to deliver domestic and regional programming, offering cultural and educational advantages. Its local and regional vocation has been assured by its new mission statement. (" Elle doit privileger l'information décentralisée et les événements régionaux ")Translated it reads:

'It must promote local news and regional events and to introduce and familiarise the different regions of France and Europe and « to give space to our lively spectacles ».'

France 3 was originally based at 13–15 rue Cognacq-Jay in Paris, which housed the television services of the former Office de Radiodiffusion Télévision Française (ORTF).

Since TF1 became independent from the ORTF, FR3 was based at the Maison de la Radio in the 16th arrondissement of Paris with its editorial base located at 28 Cours Albert 1er in the 8th arrondissement.

In 1998, France 3 moved to a new base at 7 Esplanade Henri de France in the 15th arrondissement. This also houses the rest of France Télévisions' operations. The headquarters are accessible by taking the RER Line C at Boulevard Victor.

France 3 has fewer audience constraints when compared to sister channel France 2, with France 2 being the flagship public channel. This allows the channel to concentrate on specialist and cultural programming.

There are three weekday news bulletins broadcast as part of the channel's schedule:

12|13 is broadcast every day between 11:45 and 13:00 CET, presented by Emilie Tran Nguyen on weekdays and Catherine Matausch at weekends.

A typical edition of 12|13 consists of national news headlines at 11:45 followed by an Outre-Mer bulletin from the studios of RFO Paris at 11:50. The regional opt-out bulletins (midi-pile) air at noon, followed by the national news from 12:25–12:55 CET.

France 3's flagship evening news programming block, 19|20, airs nightly between 18:40 and 20:00 CET. The nationwide sections of 19|20 are presented by Carole Gaessler from Monday to Thursday and Catherine Matausch from Friday to Sunday.

A typical edition of 19|20 opens with a short summary of the national and regional headlines. This is then followed by an opt-out for either regional news or local features, with the main regional news airing after this at 19:00. The national news concludes the programming block at 19:30.

Previously, a 15-minute programme, launched in July 2010 called 18:30 Aujourd'hui opened the 19|20 news sequence, presenting the leading news stories from France 3's regional news bureaux. It was cancelled in September 2011, with the regional round-up moving to the 12|13 news programme.

Soir 3, broadcast every night at 22:30 CET, is the network's late night news programme, presented by Francis Letellier (ad interim) on weeknights and Sandrine Aramon at weekends.

On 5 January 2009, the programme began to incorporate a 5-minute regional news opt-out as part of a revamp of France 3's schedule to accommodate the end of prime-time advertising.

One of France 3's most well-known programmes is Plus belle la vie, a recurring soap opera based in the fictional neighbourhood of Mistral, Marseille. The show has garnered critical acclaim within France and commands one of the highest viewing figures for the channel.

Amongst the programmes imported by France 3, British dramas feature prominently. Popular detective dramas A Touch of Frost, Lewis, Inspector George Gently and Midsomer Murders are shown and have different title names, such as Inspecteur Frost, Inspecteur Lewis and Inspecteur Barnaby.

From its historical origins, the Third Channel has utilised regional editorial and production centres which were developed since 1963 and owned by the ORTF.

The regional centres are often grouped in two levels – two half-hour news programmes and a short late night bulletin are produced and broadcast each day (in many cases, separate bulletins are produced for various parts of the region). The centres also produce shorter, more localised news bulletins for broadcast within 19|20. For example, France 3 Nord Pas-de-Calais Picardie produces localised bulletins for Côte d'Opale, Lille Métropole and Picardy. Various sport, features, current affairs and entertainment programming produced for and about the regions are also broadcast.

13 regional stations make up the network. Between them, the stations provide 24 sub-regional services, whose broadcast areas approximately match the 22 former metropolitan régions of France (the exceptions being that Provence-Alpes-Côte d'Azur and Rhône-Alpes are sub-divided into two). Each sub-regional news service emanates from a distinct centre of production. In addition, the stations provide 42 more localised news opt-outs.

Some news reports sourced from France 3 Ouest were aired by Channel Television for the now-defunct weekly news programme Rendezvous Dimanche. In Belgium, local programming from France 3 Nord Pas-de-Calais Picardie has been known to receive twice the number of viewers than in its intended coverage area.

Within the main 19|20 programming block and depending on where the viewer receives France 3 via terrestrial transmitters, local opt-out bulletins (some live, some pre-recorded) concentrating on specific ="fr" xml:lang="fr" >communautés</span> are aired. The ten-minute opts air at around 1845 CET before the main regional news.

Regional programming in the Occitan language started sporadically, with 15 minutes daily of news reports. After audience protests, by 1982 the time devoted to the language rose to over 3 hours weekly.[3]

Programmes in the Breton language started with a daily news bulletin from predecessor RTF Télé-Bretagne.

Despite having special status as a semi-autonomous region, only 40 minutes a week are devoted to the Corsican language. The first programme in Corsican was in 1966 and was a weekly poetry reading from a Corsican-language school.[9]

Since the creation of its predecessor RTF Télé-Strasbourg, there have been sporadic programmes in the Alsatian language. By 1974 there was a weekly show of 45 minutes, in 1989 Rund Um, a magazine programme aired its first episode. After the merger of France 2 and France 3 into France Télévisions, France 3 Alsace has financed an Alsatian version of animated series Tintin.

Retrieved from "https://ultimatepopculture.fandom.com/wiki/France_3?oldid=88199"
Community content is available under CC-BY-SA unless otherwise noted.