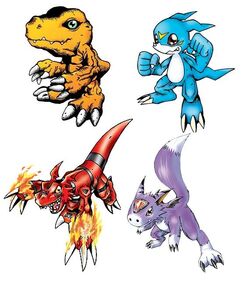 Digimon are fictional creatures from the Japanese Digimon media franchise. They are central to several anime series and films, manga, video games and other merchandise. The word "Digimon" is invariable in the plural, and stands for "Digital Monster". Digimon include almost all the creatures that reside within the fictional parallel universe called the "Digital World." There are currently 881 different species of Digimon, as well as unconfirmed and new generations of Digimon yet to be revealed. The rate of new Digimon species continuously increase as the Digital World expands each year.

Digimon hatch from eggs called Digi-Eggs/Digitamas. (In the English language iterations of the franchise there is another type of Digi-Egg that can be used to Digivolve, or transform, Digimon. This second type of Digi-Egg is called a "Digimental" in Japanese.) They age via a process called "Digivolution" which changes their appearance and increases their physical powers. Some Digimon act feral, like wild animals. Most, however, possess human intelligence, speech, and personality traits.

The first Digimon anime introduces the Digimon life cycle: they age in a similar fashion to real living organisms, but do not die under normal circumstances because they are made of reconfigurable data. Old Digimon and Digimon who receive fatal wounds dissolve into infinitesimal bits of data. The data then recomposes itself as a Digi-Egg and the Digimon goes through its life cycle again. Digimon who are reincarnated in this way will sometimes retain some or all their memories of their previous lifespan. However, if a Digimon's data is completely destroyed, they will die.

Digivolution is the process by which a Digimon "ages"[1] and grows up into larger and more powerful forms. Although the word "Digivolution" comes from the phrase "Digital Evolution", Digivolution is in fact more similar to metamorphosis in that Digivolution changes a Digimon from one form to another (which can sometimes be very different in appearance) very quickly.

Digivolving for Digimon is similar to aging for humans - it is generally a one-way journey whereby a Digimon will grow into a new form as they age and gain battle experience. However, moving from one form to another becomes progressively more difficult. Hence very few Digimon will ever naturally Digivolve into their final most powerful forms. The natural method for Digivolution, as depicted in the card games, V-Tamer 01, Tamers, and most of the video games, is to defeat enough opponents (in some cases absorbing their data as well) to evolve to the next level. In Frontier, it is also possible to load the data of the environment instead.

However, for the Chosen Digimon who are partnered with DigiDestined humans, Digivolution becomes far more flexible. Digimon who form bonds with a human are able to Digivolve more easily, generally through the use of a Digivice owned by the human. In such cases, the Digimon is given large amounts of energy and is therefore able to instantaneously Digivolve to a higher level. However, these Digimon will generally De-Digivolve back into a lower form after a fight. Digimon partnered to humans are also commonly able to use special forms of Digivolution not naturally available, giving these Digimon many different forms. These include Armor Digivolution, DNA Digivolution and Biomerge Digivolution (fusing with their human partners).

During Digivolution, a Digimon's appearance changes, and many of its other classifications (such as attribute and family) also sometimes do. The Digimon's fighting ability increases significantly, and the resulting Digimon is considered to be of a different species. However, Digimon species which are connected through Digivolution are generally similar in appearance. For example, Agumon is a small dinosaur-like Digimon; his Digivolved form is Greymon, a much larger fully-grown dinosaur; and then MetalGreymon, a large armored and winged dinosaur. However, Digimon can sometimes Digivolve into forms that appear very different. Salamon is a dog-like Digimon, but Digivolves into Gatomon, a cat-like Digimon. Gatomon is able to further Digivolve into Angewomon, a bipedal winged angel.

Biologically speaking, the gender of Digimon is a complicated topic.

It has officially been stated in at least two places that Digimon do not have "gender" - one in Chiaki J. Konaka's official Digimon Tamers character design notes for Renamon, and again, by Renamon herself in an episode of the series, when she states that "Digimon aren't divided into gender."

This, however, is not particularly congruent with the portrayal of the creatures in the series. Many Digimon (particularly those of humanoid design) are quite obviously visually designed to appear as being specifically either male or female, and most examples of the species speak with voices that denote male or female speakers, as well as regularly being referred to as "he" and "she." Going one step further than that, there are example such as Jijimon and Babamon, who are called a married couple. Even Konaka points this out, when he says that "gender seems fairly easy to identify in Digimon." It is also of note that some Digimon have their gender denoted in their names, and this allows to differentiate between similar-sounding Digimon. An example being Angemon and Angewomon, and Devimon and LadyDevimon.

In truth, this is probably the end result of semantic confusion - although "gender" is regularly used as a word to hold the same meaning as "sex," academically, they mean different things. "Gender" is the social construction by which individuals are defined as male or female based on their mentality. Digimon, inarguably, have this. On the other hand, "sex" is the biological condition of being physical male or female. Although a comparatively small number of Digimon display certain secondary sex characteristics (body hair, breasts), it would appear that this is what Konaka is attempting to say that Digimon do not have - that they lack the biological classifications of being male and female, do not have physical features that distinguish the males and females of species (for example, the female Biyomon of Digimon Adventure and the male Biyomon of Digimon Savers are visually identical), and do not sexually reproduce.

Digimon are generally not given individual names, and are instead simply referred to by the name of their species. So the word "Agumon" actually refers to a Digimon species, and not a single individual Digimon. The Agumon in Digimon Adventure and the Agumon in Digimon Savers share the same name because they are of the same species. However, they are not the same individual, and are different in appearance (and voice).

When a Digimon Digivolves and assumes a new form, its name changes to match the species of its new form. However, it is still the same individual, despite having a different name.

The exception to this is the Digimon manga series V-Tamer. In this series, Digimon were given individual names. The main Digimon character in this series was a Veedramon named Zeromaru,or Zero for short. Although Zero was able to Digivolve into more powerful forms such as AeroVeedramon and UlforceVeedramon, its name remained as "Zero" (although its species and form changed). The Digimon Arkadimon (also from the V-Tamer series) is also an exception because all its 6 Digivolution forms share the same species name. So that "Arkadimon" is both the name of this character, and the species name for all of its 6 Digivolution forms.

Digimon species are given many different classifications. With the exception of level, these are generally only important in the Digimon card game, and play a very small role in Digimon anime.

All Digimon species are classified into four attributes - Data, Vaccine, Virus, Free, and Variable. Most Digimon fall into the first three categories, the fourth "Variable" category is exclusive to Hybrid Digimon. There is also one other group "Unknown", for Digimon who either do not have an attribute, or are classifed as being "Unidentified".

Digimon in the card game are also classified into 10 different "Digimon families". These classifications are mostly trivial. They do not appear in the Digimon anime series, and have little bearing on actual gameplay in the card game.

Each Digimon family have a different colored background in the Digimon card game, and the Digimon within a family usually have something in common. For example, the Dragon's Roar family consists of Digimon who resemble dragons.

Digimon species are classified by Digivolution levels. Digimon generally hatch out of Digi-Eggs as Fresh level Digimon. In the anime, most digimon encountered are of the rookie or champion level, ultimate and mega-level digimon are rarer. Digimon of one Digivolution level are generally far stronger than Digimon of the previous level. There are exceptions where a Digimon has been able to defeat an opponent of a higher level. There are also cases, such as with Lucemon and Arkadimon, where a Digimon is far more powerful than what its actual Digivolution level would lead one to think.

For most Digimon, there are six Digivolution levels:

There are also other levels, the most notable being "Armor" and "Hybrid". The "Armor" level appeared in the Digimon Adventure 02 series, and is reached when a Rookie (or Champion Level in Gatomon's case) Digimon uses a Digi-Egg to Digivolve into an Armor Digimon. The "Hybrid" level contains several sub-levels, and is exclusive to the Digimon Frontier series for Digimon who are formed "Spirit Digivolution".

There are some Digimon species who have multiple "modes", and are able to "Mode Change" between them. Often, this involves going from their normal form to a special mode that is more powerful in some way. For example, Beelzemon and Beelzemon Blast Mode. A Digimon's different modes are generally very similar in appearance (in this case, Beelzemon Blast Mode is simply Beelzemon with a giant blaster on one arm, green eyes instead of red, and two pairs of wings (two large, two small)).

Different modes of a Digimon are generally considered to be the same species. This is because a Digimon who goes through a Mode change remains at the same Digivolution level[citation needed] (Imperialdramon (Dragon Mode), Imperialdramon Fighter Mode and Imperialdramon Paladin Mode are all Mega level digimon), and retain the same name (except with a suffix giving the name of the new mode).

Although Mode Changing does not result in a change in a Digimon's species or level, it is considered a form of Digivolution.[citation needed][4]

As another form of classification, all Digimon species are given a "Type". This generally describes the physical appearance of the Digimon. So for example, Agumon is a "Reptile Type" Digimon, whereas Angemon is an "Angel Type" Digimon.[5] Some types, such as "Insect Type", include dozens of Digimon, whilst others, such as "Ancient Insect Type" are unique and belong to only a single Digimon (in this case it is AncientBeetlemon.)[6] A Digimon species is generally classified into only one "type".

Like the "Family" classification, "Type" is considered to be a fairly trivial and unimportant classification. It is referenced occasionally in the anime,[7] and has some minor gameplay effects in the Digimon card game.

Retrieved from "https://ultimatepopculture.fandom.com/wiki/Digimon_(creature)?oldid=47671"
Community content is available under CC-BY-SA unless otherwise noted.